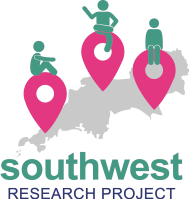 South West Foundation and now South West Community Matters has always been involved in research, and has previously undertaken a wide range of research projects which focus mainly, but not exclusively, on the voluntary and community sector.

The publications are listed in order of their year of publication. Below each document there is a note of the title and a summary contents.

The most recent publications are listed first, and they are all downloadable as pdf files

This research investigated the contribution that women are making to communities through their involvement in small Voluntary and community sector organisations (VCSOs) operating in the South West Region of England.

The research explored the roles the women play and what type of involvement they have in the development and delivery of services through small VCSOs. It also considered what motivates the women to become involved and to stay involved in these small groups and how visible and valued that involvement is.

The research utilised a feminist approach with mixed methods to provide a space for the voices of the women involved to be heard and over 200 women from small ‘Below the Radar’ (BTR) VCSOs took part including over 180 by completing scoping questionnaires, thirty-two in two focus groups and twelve who took part in semi-structured interviews.

The study found the context and circumstances in which small VCSOs operate contained factors, which have either encouraged or discouraged the involvement of women in their communities, including issues related to women’s current position in society. The commitment, passion and desire to carry out work, which would benefit the whole community, were among the key reasons the women undertook the work, rather than financial reward or status. The work of the women involved in the research was also found to contribute to stocks of social capital in those communities.

The research analysed the degree to which recent governments have sought to utilise the VCS to assist with the delivery of their own agendas.

The research suggests that women’s involvement within the smaller BTR VCSOs could be conceptualised in a framework called the ‘Women Alchemists’ and that the use of the term ‘Women Led Organisations’ could more fully build on the contribution of women and to nurture it in a way which enables it to grow and be sustained without altering its nature.

J. Crawley (ed) 2008 Where are all the women in the Voluntary and Community Sector?
2008_Where-are-all-the-women-SWF.pdf
Adobe Acrobat document [849.7 KB]

This report is based on two focus groups which were held, one in Bath and North East Somerset and one in Cornwall, to look at the issue of women’s involvement in small Voluntary and Community Groups. We also sent out questionnaires.

Women Take Part is a piece of work funded by the Government Equality Office, looking at the participation of women, in particular under-represented women, in governance and decision making, in both community and public life

The project collected information about two sides of the story:

’what works' in terms of approaches, initiatives and learning models that encourage different groups of women to become more involved and

‘what needs to happen' so that structures, policies and organisations work in ways that encourage the recruitment and support of more women.

In addition to the questionnaires a selection of more in depth face to face and
telephone interviews were undertaken with leading members of the Forums
throughout the region along with visits to the forums themselves.

These older people's forums have magically combined small grants investment
with an appropriate community development approach that has encouraged
the forums to develop, with outside support but with inner integrity.

The older people’s forums, with their reach, their ability to involve the local
community and provide a vehicle for individuals in communities to contribute,
are worthy of the attention and investment of both local statutory agencies
and regional bodies alike.

The Forums are a major force to be reckoned with
and are now ‘coming of age.’

The South West Regional ‘Empowering Communities’ Consortium of the National Empowerment Partnership commissioned a set of reports reflecting research and other activities undertaken through the South West Empowerment Development
Project (October 2007 – March 2008). They were:

All the reports were researched and written by a joint team from The Evaluation Trust and South West Foundation, with support from Professor Marilyn Taylor, Professor of Urban Governance and Regeneration at the University of the West of England. The team members were:
Philippa Chapman; Erica Lewis; Maria Clarke; Lori Streich; Jan Crawley; Sarah del Tufo; Andrew Edgington; Jenni Wilson; Lesley Frazer

These reports, as with all research, reflect the views of those who took part and are a snapshot in time and there may be other perspectives that are not recorded.

NO BOUNDARIES - A study of networks and empowerment
2008_Empowerment and Networks.pdf
Adobe Acrobat document [1.6 MB]

Setting the scene
Published in 2001 this report provides a historical context for the Voluntry and Community Sector and provided the first research report to inform the Foundation's grant programmes.
Setting the Scene First Report.pdf
Adobe Acrobat document [362.4 KB]